No other energy generating technology carries the combination of benefits that fuel cells offer. These benefits include:

A fuel cell running on pure hydrogen is a zero-emission power source. Some stationary fuel cells use natural gas or hydrocarbons as a hydrogen feedstock, but even those produce far less emissions than conventional power plants. Fuel cell power plants are so low in emissions that some areas of the United States have exempted them from air permit requirements. Fuel cells are also very quiet, which reduces noise pollution.

Based on measured data, a fuel cell power plant may create less than one ounce of pollution per 1,000 kilowatt-hours of electricity produced – compared to the 25 pounds of pollutants for conventional combustion generating systems. 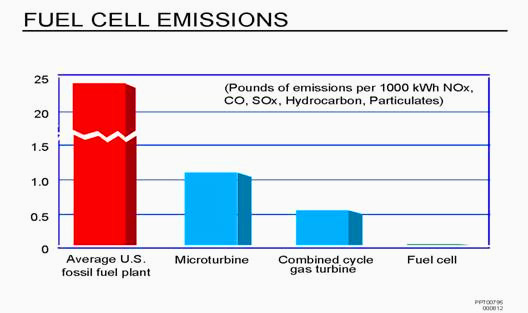 Fuel cell vehicles are the least polluting of all vehicles that consume fuel directly.

Because they make energy electrochemically, and do not burn fuel, fuel cells are fundamentally more efficient than combustion systems. When the fuel cell is sited near the point of use, its waste heat can be captured for beneficial purposes (cogeneration). In large-scale building systems, these fuel cell cogeneration systems can reduce facility energy service costs by 20% to 40% compared to conventional energy service.

The National Power Laboratory estimates that the typical computer location experiences 289 power disturbances a year that are outside the voltage limits of the computer equipment. U.S. businesses lose $29 billion annually from computer failures due to power outages and are quickly realizing that fuel cells may help prevent not only loss of power, but also loss of dollars. Fuel cells offer clean, high quality power, crucial to an economy that depends on increasingly sensitive computers, medical equipment and machines.Fuel cells can be configured to provide backup power to a grid-connected customer, should the grid fail. They can be configured to provide completely grid-independent power or can use the grid as the backup system. Modular installation (the installation of several identical units to provide a desired quantity of electricity) provides extremely high reliability in specialized applications. Properly configured fuel cells can achieve up to 99.9999% reliability, less than one minute of down time in a six year period.

Most fuel cells run on hydrogen and will continue to generate power as long as fuel is supplied. The fuel cell doesn’t care where the hydrogen comes from, so a fuel cell system that includes a “fuel reformer” can generate hydrogen from diverse, domestic resources including fossil fuels, such as natural gas and coal; alcohol fuels, such as methanol or ethanol; from hydrogen compounds containing no carbon, such as ammonia or borohydride; or from biomass, methane, landfill gas or anaerobic digester gas from wastewater treatment plants . Hydrogen can also be produced from electricity from conventional, nuclear or renewable sources such as solar or wind.

Hydrogen can be produced from domestic sources, eliminating the need to import foreign oil. Passenger vehicles alone consume 6 million barrels of oil every single day, equivalent to 85 percent of oil imports. If just 20 percent of cars used fuel cells, we could cut oil imports by 1.5 million barrels every day.Because they don’t have to be attached to the electric grid, fuel cells allow the country to move away from reliance on high voltage central station power generation which are the most likely terrorist targets in any attempt to cripple our energy infrastructure.

The beauty of fuel cells is their versatility – since they are scalable, fuel cells can be stacked until the desired power output is reached. Larger fuel cells can be linked together to achieve megawatt outputs. Fuel cells are quiet, which allows for siting close to business or residences. They are also durable and rugged, so they can withstand any terrain or weather conditions.

Fuel cells are being developed for portable electronic devices such as laptops, cellular phones, etc. Fuel cells are providing e a much longer operating life than a battery would, in a package of lighter or equal weight per unit of power output. The fuel cell doesn’t require “recharging;” a liquid, solid, or gaseous fuel canister could be replaced in a moment. Fuel cells also have an environmental advantage over batteries, since certain kinds of batteries require special disposal treatment. Fuel cells provide a much higher power density, packing more power in a smaller space.Many organizations are working with the military to incorporate fuel cells into their equipment since soldiers are starting to carry a range of enabling electronic technologies, computers, personal radios, displays and thermal imaging, all intended to increase effectiveness, lethality and survivability. Fuel cells can operate 10 times longer than conventional batteries used to power hand-held battlefield computers, and are much lighter, have no heat signature and are more cost-effective.Content Courtesy of www.fuelcells.org