How Does Cogeneration Work 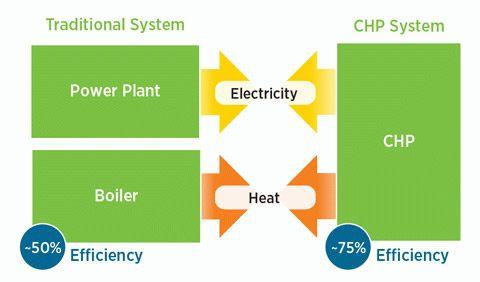 Combined heat and power (CHP), also known as cogeneration, is:

CHP technology can be deployed quickly, cost-effectively, and with few geographic limitations. CHP can use a variety of fuels, both fossil- and renewable-based. It has been employed for many years, mostly in industrial, large commercial, and institutional applications. CHP may not be widely recognized outside industrial, commercial, institutional, and utility circles, but it has quietly been providing highly efficient electricity and process heat to some of the most vital industries, largest employers, urban centers, and campuses in the United States. It is reasonable to expect CHP applications to operate at 65-75% efficiency, a large improvement over the national average of ~50% for these services when separately provided.